I created a vault on an external hard drive on an empty NTFS Partition (J:) with the size of 242 GiB. According to Windows, the resulting virtual drive and my C: Partition have identical size and free space (98 GiB overall size, 6 GiB free space). Inside the vault on Partition J:, I only can use those 6 GiB for data storage. Partition C: is the one where my Windows 7 and Cryptomator are installed.

The screenshot below shows the sizes of the three partitions as well as the Cryptomator app for verification of the name of the vault and the partition used. 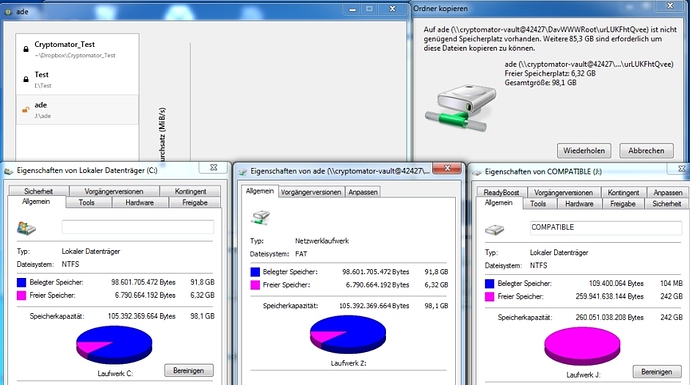 This is a problem related to the WebDAV client implementation on Windows and nothing we can directly influence. This is just the way, Microsoft wants it to be:

Microsofts “product teams” seems to be very bad at research, as apparently they haven’t heard of RFC 4331 (which Cryptomator has implemented) and thus Windows just shows the capacity of the system drive.

The good news is: The shown capacity doesn’t affect how much files you can actually put onto the drive, as the capacity doesn’t change. So even if you have just 10 GiB left on your C: drive, you can still encrypt 100 GiB, if your vault is located on e.g. the D: drive, which has 100 GiB left.

Thank you for your explanation. Unfortunately, I am not able to fill the vault with more than 6 GiB data. If I want to add additional files to the virtual drive, I get a Windows 7 error message. You can see that one in the right upper corner of the screenshot of my initial post.
Is there a workaround?

Is there a workaround?

Try dragging your files in multiple batches, each of them not exceeding the alleged limit.

Someone used TeraCopy as a workaround: https://github.com/cryptomator/cryptomator/issues/80#issuecomment-137289157