Very slow at the new Version

Since the version 1.40 the load of the container is very very slow, it is so slow that i cant copy a file in the tresor. Is it about the new Dokany, when i load it as webdav it is the same.
Is something wrong at my system or is it the new version. because for the update it work all fine

Regarding Dokany: Dokany has currently a reduced performance because it has only one single Worker to handle the actions taken on the vault. This will be improved with the next 1.4.1 release. (The related github issue report is here)

Regarding WebDAV: It was never super fast, but it should have a reasonably speed.

If you upgrade to 1.40 and use dockany then systeem is EXTREEMLY slow and NOT workable !!
HUGE CPU utilisation !!!

Opening an excel file and saving the changes NOT possible …
I reverted back to version 1.34 with webdav and evererything is fine again . …

you know, you could simply change to WebDAV in the settings dialogue and benefit from other improvements

I’ve the same issue since 1.4.0 / Dokany and Windows 10. When I browse the folder structure or open an file in my vault, which is located on a local NAS, the network traffic goes up to 3-5 Mbit/s. Therefore I started Wireshark and I saw, that the SMB protocol sends a special request for each file: “GetInfo Request: FILE INFO”. This request is answered with “INVALID_INFO_CLASS”. I guess that’s the reason for the hugh traffic.

But for me the protection of Defender is more important than the performance of Cryptomator. Therefore I decided to reenable Defender. Maybe someone else will find another solution to exclude Cryptomator from Defender (I’ve already tried to exclude Cryptomator.exe and the path to the vault without success), or maybe to solve the problem without exluding something.

Happy news for everybody: Yesterday,the preperations for Cryptomator 1.4.1 were finished and will be released very soon. One of the most important changes is the perfomance boost when using Dokany (;

Edit: Dokany test as described here For Version 1.4.0 and higher: Is it Dokany or just me? (or maybe Cryptomator :-P) is working fine.

I too was the same problem with versions 1.42 as well as 1.34 on OneDrive making the whole computer unusable. I found that making files available offline solved the problem immediately.
Hope this helps you guys, it was driving me absolutely crazy for the past few days…

Well, now at least I am able to open some files using Dokany with Strato. Performance approx. equals to webdav. But after some operations, uploading a large file or renaming a file, the encrypted drive slows down massively, crashes or shows empty folders only.

I upgraded to version 1.4.5 ( without telling my wife

) and activated dokan access.
within 30 my wife was not happy with the speed of her computer.
I switched back to webdav and told her I fixed it.

I think when we change from webdav to dokan than the speed must be at least the same or higher.

I’ve just copied over 11.000 files to a new Dokany container, totalling ~1 GB. Performance was VERY GOOD. The difference for practical purposes to normal work was negligible.

However my problem is that I plan to use Cryptomator as intended by its authors, that is to keep only private files on it and sync with untrusted cloud using cloud storage provider’s software (e.g. Google Drive). I’m not trying to protect my entire computer using Cryptomator. For that I have BitLocker (on one computer) or VeraCrypt (the second one).

Cryptomator (as far as I understand it) is NOT meant to install programs on it or keep database files on it or other data that requires very I/O intensive access. It’s a secure storage for private documents that are to be synchronized to cloud providers (or other destinations) that we don’t trust. I’ve managed to generate 20 GB of such documents during last 10 years (notarial documents, financial details, agreements with customers, court documents and sentences, and all kinds of scanned official papers that may be important someday, and so on). The rest of my 2 TB stuff doesn’t require high security with backup to cloud, and is rarely updated, so I back it up in a different way (to my NAS). But YMMV. 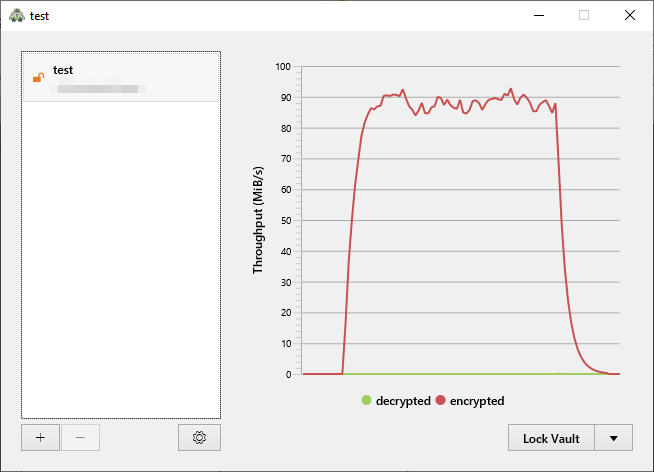