After a new windows start, the drive associated with the decrypted files is “not connected”. I have to manually disconnect and reconnect the vault. After this, everything works fine. What can I do to fix the problem and regain the previously comfortable situation when the startup worked automatically? 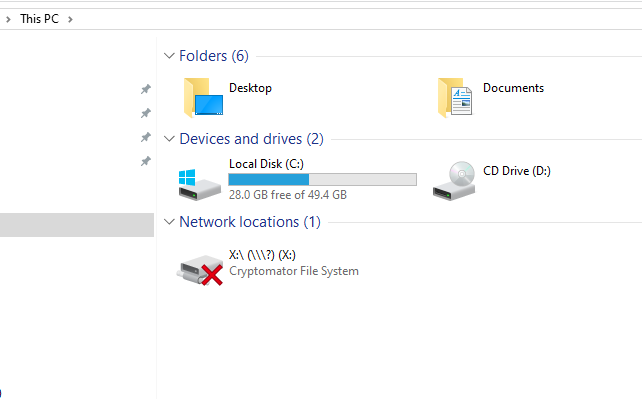 No–in windows explorer, everything looks alright, but when I click on any file or folder, the following message pops up: 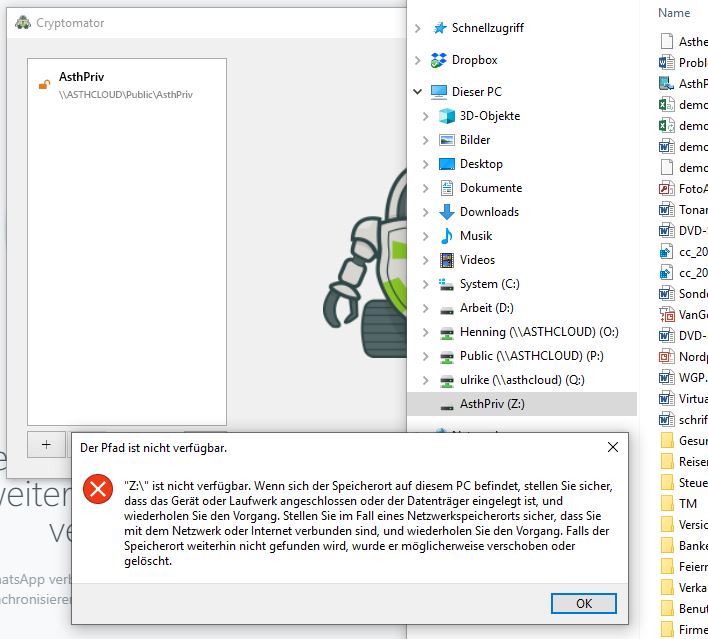 Does this change if you switch to Cryptomator 1.4.11?

I assume from the picture you are using Dokany as the unlocked vault provider. Did you recently updated Dokany?

And is your vault located on a network drive?

Up to version 1.4.13, it worked fine; do you suggest, I should step back to version 1.4.11 for a test?
I never updated Dokany on my own. If it has been updated recently, then only bundled with a cryptomator update, not separately.
Yes, my vault resides on a WD MyCloud in my LAN.

I never updated Dokany on my own. If it has been updated recently, then only bundled with a cryptomator update, not separately.

The problem with Dokany is, that it can not be updated automatically. You have to remove it, restart and install the new version. This isn’t ideal and we’re in contact with the Dokany developers to improve the situation.

The official Dokany download site is here (you want to choose DokanSetup_redist.exe).

I suggest to update since there are some downward incompabilites of Dokany 1.3.1000 and we use on our side already this version of the dll-library. But I can’t say if this will fix the specific issue.

I deinstalled Dokany 1.2, then re-run the Cryptomator 1.4.13 installation exe, but Dokany was not simultaneously re-installed. So, I downloaded DokanSetup_redist.exe (Version 1.3, as suggested) and everything workes fine after a Windows reboot.
Thank you all for your speedy help!

Unfortunately, the problem is not yet solved. After a windows restart: 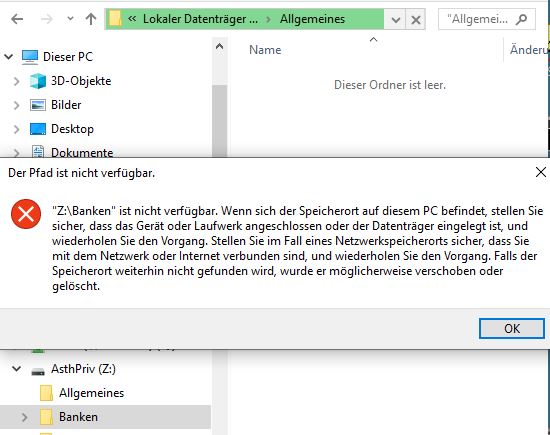 The folder “AsthPriv” lost connection and was renamed “Lokaler Datenträger” (local media).
After disconnecting and reconnecting the vault, everything is back to normal - any ideas?

We just released 1.4.15, where we removed the access via an UNC path. Can you try this version?

If not, can you send me a log file when you unlock and try to access a file? Upload the log file with Firefox Send and shoot me a PM with the link.

Unfortunately, I need a network drive and UNC to access my NAS. What makes you assume a version without this would solve the problem I reported? (Version 1.4.12 works fine, version 1.4.13 doesn’t–what has been changed?)

We just released 1.4.15, where we removed the access via an UNC path.

I can confirm that version 1.4.15 works properly–thx!

How can I be sure my NAS is up and running, before cryptomator tries to automatically connect?

That can’t be solved with Cryptomator.

That said, feel free to open a feature request for a delayed auto unlock. Maybe there are other users who would benefit from this feature.

Thanks for the suggestion. I tried out the following startup batch:
ping -n 10
start /D “C:\Program Files\Cryptomator” /MIN Cryptomator.exe
pause
exit
The connection is successful but deteriorates within minutes: First, Windows Explorer depicts the network drive with its proper name, then, the name changes to “drive Z:” without any accessible files. I think I will step back to a previous version…