We want to start development of Cryptomator 1.5.0 soon. This release has one single purpose: Redesigning the UI. We’d be happy, if you share your suggestions below. Maybe you have a good idea for the overall layout of the application or a specific control like the password strength indicator.

Please use the “heart” feature to upvote any suggestions you like, don’t write comments showing your affection. Let’s keep the discussion focused on the topic.

3 Likes
Improvement of UI Usability
How to automatically close Cryptomator after startup?
Close the window Cryptomator won't close the "App"
overheadhunter January 14, 2019, 11:24am #2

I’ll start by showing a first sketch featuring a flat design and a sub-menu per vault for unlock, advanced vault settings, reveal vault, etc. All icons get a tooltip, of course. 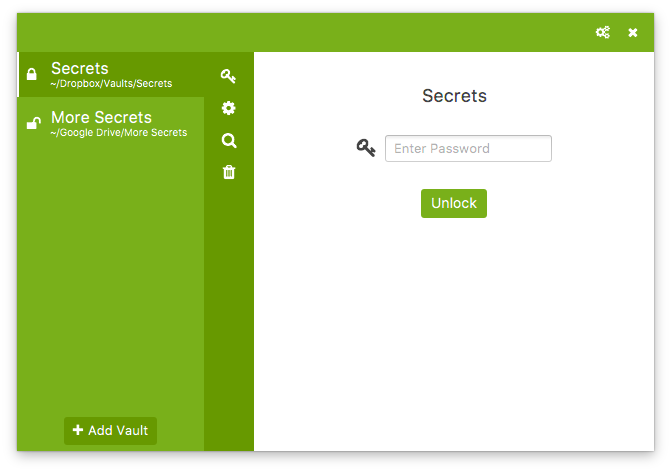 Will the left pane be resizable? I have folders that have long paths and they get truncated ("…"). Have to hover over them and wait (I don’t like to wait). If not, could the ratio of left to right change (more left, less right)? There’s very little to show at the right and it’s fixed-length. (Maybe the buttons/icons open stuff in the right pane - which might need more space?) The old UI can’t be resized at all, so maybe if you just allow the entire window to be resized that would help.

I’ve just discovered Cryptomator a couple of days ago while looking for an alternative to doing backups to a remote Veracrypt volume. So far, I’m impressed with Cryptomator. While there’s room for improvement, it’s very usable and efficient right now

Thanks to the developers for creating it

That being said, one of the areas where I think Cryptomator could improve is precisely its User Interface. So I was delighted to find this thread asking for suggestions

Here are a few (/a lot) of suggestions for future versions of Cryptomator. Some may be feasible, some may not.
Also, I’m currently running Cryptomator on a Windows 7 PC. I haven’t tried it on any other platform so my suggestions are centered on that OS

Thanks in advance for considering them and I hope that some can make it to Cryptomator 1.5

Allow users to select Cryptomator’s UI language, instead of defaulting to the system’s current language (I’m guessing that that’s what it’s doing right now). Translations are not always perfect and choice is always good. My native language and my system’s language isn’t English, but I’d like to have the option of using Cryptomator in English. A beneficial side effect of that is that it may simplify bug reporting, since users of Cryptomator in other languages can temporarily switch to English in order to be able to report error messages, etc. in English to the support forum or the issues section

Allow users to reorder vaults in the User Interface. I’m guessing that currently vaults are always displayed oldest to newest. Some users may prefer to arrange them in other ways

That would be nice. I already missed that function when playing around with some vaults.

@Michael @city_zen You can reorder vaults.

Thank you! Didn’t notice that yet. 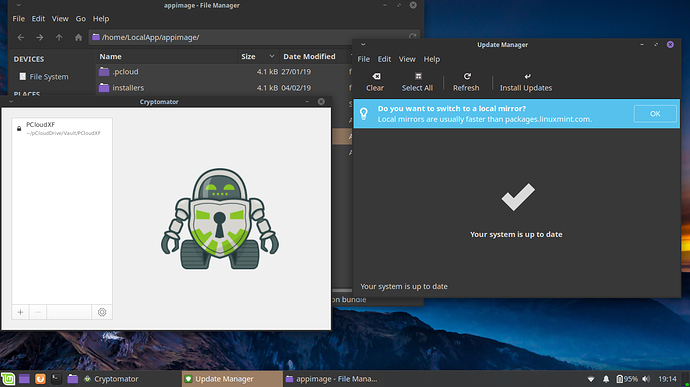 Being able to define custom themes via external css files should do the trick. We can then add “official” dark themes with one of the minor releases.

Some of those have already been flagged on Github, but here are my 2 cents :

System tray, background mode, launch at startup…
Those issues seem crucial to me. IMO, considering the software purpose, it should not appear in taskbar/dock and be managed via system tray.

Global settings
As pointed out by users, options to launch at startup, launch in background… should be available directly in-app instead of forcing the users to interact with OS-level configuration.

Per-vault settings
I’m on macOS using Path Finder as a Finder replacement, and for a reason I can’t explain the folders are opened using Finder instead of Path Finder even if the command issued by your MacMounter class is “open” which when used in Terminal opens Path Finder correctly.
I’m aware that this point is not relevent to most users but I think an elegant way to handle this and many other advanced usages would be to replace the “Reveal Drive” checkbox by a select field “On mount” with options “Reveal folder” (default), “Do nothing”, “Execute a command”.
Selecting the last option would reveal a text field allowing the user to input a command that would be executed after replacing a specific placeholder by the directory path. An informative label should be present under the field to inform the user of the placeholder to use (e.g. $DIRECTORY).
That would solve my specific issue (running “open -a ‘Path Finder.app’ $DIRECTORY” would do the trick), but would also allow users to easily run any custom scripts and hooks directly from GUI.
For good mesure:

I’d suggest going as close to the AgileBits Knox interface as possible.

That App was great. Don’t know why they killed it…

I would like Cryptomator to run as a service automatically after windows startup, with the password stored in the system as it currently is. A tray icon is all I need to know it’s working, and if I need to check or reconfigure anything, I just click on the tray icon. Could this be added in a future release?

Hey, I’d like to offer my two cents on this.

When a Vault is open, if the file manager window that once opened the Vault has been closed, it would be nice if there was a shortcut to launch it again from Cryptomator’s client window.

Currently one has to open the Vault via their file manager or by locking and unlocking the Vault.

I understand that this is quite silly, and may even be difficult to implement on certain OS’s, but this trivial feature could be quite helpful.

it would be nice if there was a shortcut to launch it again from Cryptomator’s client window.

There is one.
Klick on the unlocked vault. at the bottom right klick the drop down (yellow frame).
Then select “reveal drive” (red frame) 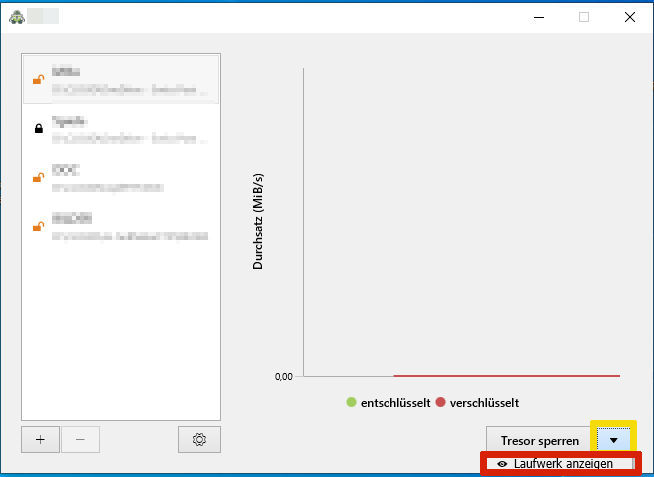