First off: thanks for making Cryptomator!

To know where I’m coming from: I already used a home-grown solution similar to Crytomator for quite a few years now on my Windows machines. I have a Python script that uses Veracrypt and junction.exe to have double-clickable “.encfol” files (actually Veracrypt volume files). When you double-click them, the script asks for the volume password, finds a free drive letter to mount the volume on, calls junction.exe to make a same-named folder junction to that drive (next to the activated .encfol file itself), and finally opens that folder too (with some optional custom menu support baked in). I use this a lot for my freelance development work; each project gets it’s own vault to not have all the sensitive data from all my clients in plaintext on my machine all at once when I need to work on something. And I also have separate vaults for my Thunderbird mail folder, a vault with all license keys, one with my website subscriber’s info, one with sensitive private info, etc.

Rather similar and just as secure, but since Veracrypt volumes are fixed-size, it is quite a nuisance to manage the ever-changing volume sizes. The script does suggest automatically resizing the volume when closing the vault when it’s free space gets above/below certain limits, but that involves setting up a new volume, formatting it, mounting it in parallel, copying over the content (robocopy) and then verifying the copy was OK (winmerge), all with lots of non-suppressible prompts from the used apps.

All that is now history for me with automatically resizing Cryptomator vaults – again, thank you, and my donation has already been made

Though I do miss some of the functionality I have with my own custom solution… Maybe some of it is worth adding to Cryptomator?

Anyway, Cryptomator already gives me more benefits than drawbacks right now, so no complaints from my side, but maybe you find the above inspirational?

Oh, and as a follow-up now that I’m in the process of moving over all of my vaults:

Welcome to the Cryptomator Community

thanks for this rich feedback and the various feature suggestions! For some of them an answer already exists:

my script mounts it onto the highest available drive

Well, i would say this is a user specific system setup. We needed to choose a strategy and changing it now could break other homegrown solutions.

I know of the separate Cryptomator CLI project, but it’s not quite ready for prime time yet I suppose?

Apart from the lack of features and rather clunky usability, it works. The reason for this is, that it is mainly community driven and the Cryptomator developers focus on the GUI app. But it seems you are capable of programming on your own, so your welcome to bring this project forward!

Recycle bin support. I know this feature is already underway with Dokany and already preliminary available via the custom mount option MOUNT_MANAGER, but it would be really nice if that would become the default.

Since Cryptomator supports multiple platforms, we would like to aim for an OS independent solution, as @overheadhunter pointed out in https://github.com/cryptomator/cryptomator/issues/248#issuecomment-759543400. There are also already some ideas, but nothing concrete.

but some GUI reminders could add some benefit?

You might be interested in the currently implemented auto-lock feature. Apart from that, adding a gui indicator is possible.

I suspect these folders get mounted via Dokany more like in a FAT than NTFS style?

They are neither. Unlocked vaults have their own filesystems (CryptoFS), which mimics/passthrough certain features common to most filesystems. NTFS Alternate streams only exists on NTFS and, as already mentioned, we aim for cross-platform compability. Hence, there are no plans to integrate this feature.

There is an already open feature request for this, see https://github.com/cryptomator/cryptomator/issues/200.

It’s quite possible that i did not addressed everything here, but if you that a certain feature is a must-have, have a look at our issue tracker, and if it is not already present, open a new ticket: 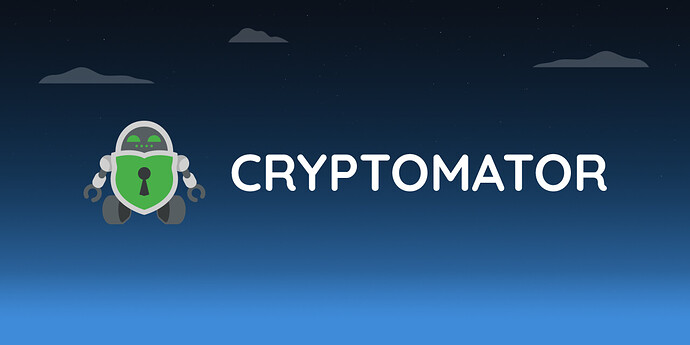 Apart from the lack of features and rather clunky usability, it works. The reason for this is, that it is mainly community driven and the Cryptomator developers focus on the GUI app. But it seems you are capable of programming on your own, so your welcome to bring this project forward!

Heh – you got a point there. But I always seem to have more freelance project hours hogging my agenda than there are days per week… And I’m a C++ coder who hasn’t touched Java in nearly 2 decades, so I’ll restrain myself before I make a mess of your code base

Anyway, I’ve added 3 new feature suggestions to Github for the above suggestions I think are most usable to other people too. Though “most usable” ofc also depends on your target demographic (power user or regular user?)

I cannot tell you, how much I like what you wrote and propose!

Those are immensely usefull ideas!

As I also use VeraCrypt, do you probably offer your scripts for handling this somewhere?
I would love to give this a try

I’ve attached the Python script I used (renamed to .log). It needs to have VeraCrypt, WinMerge and ofc Python (3.x) installed, as well as a copy of junction64.exe next to it. The Python script itself also needs WXWidgets. Junction64.exe you can get that one from Microsoft directly I guess? I have it still lying around since Windows XP when junction creation was only possible by external apps; maybe today there’s a build-in exe that can do it? And it expects some .ico files to pimp it’s taskbar icon.

Anyway, the script is quite reliant on how my PC is set up, so I think you’re better of using it as inspiration

Also note that using this script is far less enjoyable and reliable than using Cryptomator. It’s a hack after all, linking disparate apps together. I built in as many safety guards as I deemed necessary for personal use, but it’s not fool-proof. One thing I e.g. sometimes did on accident was close the msgbox that pops up asking to close the vault while Thunderbird was still read/writing from it’s content. Thunderbird wasn’t happy afterward

The script works with .encfol files, which are really just VeraCrypt container files. To customize the vault open action, you can also put a like-named .encopt file next to it; it should have ini-like content describing all options available after opening a vault.

I myself have made a file association from .encfol files to my script file so that I can just double-click them to open them. And the script also detects an extra cmdline option to force a vault resize. Both actions are registered via the .reg file I also attached (install.log).

Aaanyway, BIG DISCLAIMER, this script has worked for me for several years, but I found it clunky in use (especially when the vault would fill up again and again – it doesn’t auto-resize on the fly at all). So far I found Cryptomator to be far superior to this. Apart from the feature suggestions in this thread ofc

And I’d like to expressly note that I do not claim it is fit for production use – use at your own risk!

Many many thanks, also for the documentation and explanation!

I downloaded everything and will archive your posting.
My PC and Mac are currently off the internet, as we have some local provider problem - it may take some days until I can this this.

Will report back then