Cryptomator drive, instead of a individual drive for each vault

first of all I would like to thank the development team. You are doing a great job and making the digital world a bit safer. Cryptomator works for me technically 100% flawless. Especially the iOS app since last year December 2021, is amazing.

As many have noticed, Boxcryptor has been taken over by Dropbox, which is a big shock for their customers. Now many will switch to Cryptomator because it is the best alternative.

What this feature request is about, as described in the title, is a new way of accessing data. Since the beginning of Cryptomator, problems have worked the same way: You unlock the vault and it is mounted as a virtual drive, like a USB flash drive. This is also great and works wonderfully, however it is a bit inconvenient especially on the Mac. When I boot up the Mac, Cryptomator automatically opens and unlocks the vault, but I don’t see it in the sidebar in the Finder on my Mac. I have to click on the Mac first and then I see all the hard drives, like the virtual one.

I would appreciate if Cryptomator would make the following change:

There should be a Cryptomator drive that contains the unlocked vaults as folders. Basically, it’s how Boxcryptor works or has worked. I don’t know to what extent this works legally or if there could possibly be patent issues.

The way I imagine it is that the Cryptomator drive will then show up consistently in Microsoft Explorer or Finder (like Dropbox or iCloud Drive). If no vaults are unlocked, then the drive would logically be empty. Maybe a message or a pop-up asking to unlock the vault would be useful here.

When files are added to a vault, they should be encrypted automatically, as usual.

In order not to confuse anyone, a switch in the settings would be great, which lets the customer choose between the classic virtual drive, for each vault, and the Cryptomator drive, which includes all vaults and which is always displayed.

I look forward to your thoughts on my suggestion, even if it is not my own idea.

@CryptomatorTeam: @tobihagemann Keep up your awesome work. Cryptomator is amazing!

Thank you very much for your kind words and your suggestion, Mattis! As you can imagine, we were quite busy in the last days.

I’m certain that we discussed this somewhere else already but I couldn’t find it. In short: Cryptomator always had a different concept than Boxcryptor.

Correct me if I’m wrong but Boxcryptor had a virtual drive on the complete cloud storage (incl. unencrypted files). With Cryptomator, you create vaults (basically, folders that are always and fully encrypted) and reveal only these. It doesn’t matter what files are “outside” of the vault, it doesn’t even matter if the vault is located in a cloud storage.

I can understand the appeal of having only one virtual drive for all vaults. But that would be a huge change and it doesn’t fit our vision at the moment so it’s very unlikely that we would work on such a feature anytime soon.

Not sure if this is really what you’re looking for but you can actually achieve something similar already. In the “Vault Options”, you can select a custom folder as a mount point. Maybe you could create a “Cryptomator” folder somewhere you’d like and then mount all vaults into a subdirectory of that.

Cryptomator automatically opens and unlocks the vault, but I don’t see it in the sidebar in the Finder on my Mac. I have to click on the Mac first and then I see all the hard drives, like the virtual one.

thank you very much for your answer. I also had a lot to do in the last few days, which is why I’m answering just now. I understand your point and can understand it, when I open the vault, the data is encrypted at all times. I also understand that a central drive would be a big change for Cryptomator.

My point is basically that as far as I know, it is not possible to make sure that a Cryptomator is always and at all times accessible in the sidebar in the Finder, like iCloud Drive for example. When I add the virtual drive to the Finder sidebar and restart the Mac, the drive disappears from the sidebar. Even if I have enabled automatic unlocking, as well as auto start of Cryptomator. The only thing I would like is the option that at any time and continuously the vault is available in the sidebar in the Finder, that would be really wonderful.

Continue with your fantastic work.

This does not work for me. The vault disappears from the sidebar of the Finder after a reboot.

Mmh, for me it does work and did work for years … iCloud, Gcloud and mailbox.org - only after a Cryptomator update I have to add them again - are you using WebDAV or fuse?

I dragged it to the sidebar but it does not appear upon reboot. I am using Fuse.

How can I get it to appear after reboot?

Why do you use crypto if you set it to auto-open? It makes no sense to me; by getting your device, I get your date, and a thief will be very thankful for that.

Same problem for me as @Mattis described. I can’t stick those vaults to the Finder Sidebar on the Mac as well and survive a reboot. So I can’t use any automation of file transfer (or other), because the original drive always change at every reboot. The larget keep the same obviously, namely the folder on iCloud/OneDrive or other Cloud Providers.

So the best for me would be: (yeah, indeed the Boxcryptor approach).

Would be great if the developers pf Cryptomator could add this.

because the original drive always change at every reboot

You can set a dedicated drive letter for each vault.
You can also configure Cryptomator to auto-start with system start and auto-open your vault(s).

Thanks Michael for your responds.

A drive letter to each vault? I never saw any driveletters on my Mac like on Windows computers? Am I missing something?

Like I said, every time I reboot (or close/open Cryptomator) the original “virtual drive” changed, so my Apps can not find it anymore and I need to re-adjust it again within the apps.

I am used to Boxcryptor and forced to find another solution, which CM seems the best available option. The design of CM is completely different then BC is/was. So it is possible that I miss some options because I simply don’t know where they are within the CM software.

Sorry, I assumed Windows as OS. My bad. As I do not use a Mac I cannot help with this.

Like I said, every time I reboot (or close/open Cryptomator) the original “virtual drive” changed, so my Apps can not find it anymore and I need to re-adjust it again within the apps.

I can tell, you are not the only one with this issue. Seems to be a bug in Crypto actor.

The vaults are mounted to /Volumes/VaultName even when you create an alias pointing to that path the system cannot resolve that path after locking/unlocking the vault. Even when the volume is there in that path and it can be manually opened via Finder and Terminal with exactly that path.

I guess this i high priority for the Devs to solve this?

@Michael Thanks. No problem. 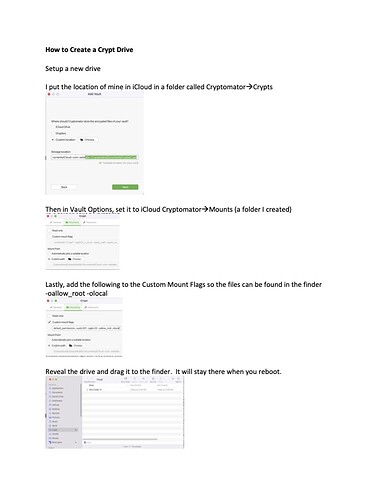 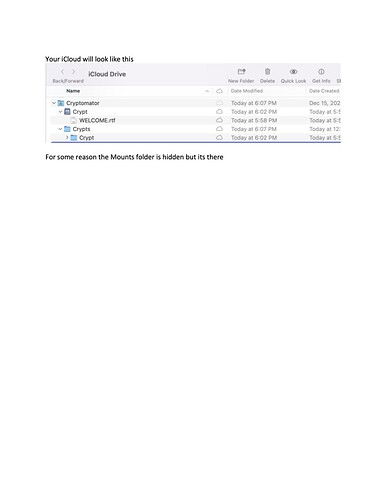 Thank you for that test. I will give the mounting with those flags a try.

Just to add for others. You should mount the unencrypted vault to a synced location like in the example above. That defeats the purpose of the encryption

The decrypted path should be /[local drive]/[any local path]/VaultName i.e. ~/unencrypted/VaultName ( ~/ is the shortcut for your home directory)

Hey Yomama, could you explain your steps with more detail? It’s very hard to understand what I have to do.