Add existing vault dialog does "nothing"

Now I can’t add the vaults that were not migrated to format 7. When I go to choose the file masterkey.cryptomator using the dialog box, after I select it, the same dialog box window appears.

Could it be that 1.5 cannot display vaults in different formats?

Could it be that 1.5 cannot display vaults in different formats?

It can’t unlock them but it will show them in your vault list and ask you to migrate them if you try to access them.

I can’t add them to 1.5. This is what I see in the log when I try to add a vault in the previous format:

Just to be sure, you still can download 1.4.17 here: https://github.com/cryptomator/cryptomator/releases/tag/1.4.17

Of course, you wouldn’t be able to open vaults in the new format but can you confirm that there aren’t any issues with the old version?

I tried a lot of variations now (also with macOS 10.15.4) and wasn’t able to reproduce the issue. Is there anything special about your setup?

I downloaded 1.4.17, and tried adding the cloud vaults (that were now saved locally) but now I get a warning saying that the vaults are in a newer format. So I’m lost now. It’s not a big deal, since I can roll back my Dropbox to the state it had before all this happened and use 1.5 to convert everything again.

You asked about VM, security software and location. I don’t use a VM to run macOS. I have some security software from https://www.objective-see.com. Presumably their software ransomwhere? could be the one causing the problem? But with 1.4.17 I never had any issues. I also have installed ReiKey, DHS, WhatsYourSign, Do Not Disturb, TaskExplorer, Netiquette, KextViewr and KnockKnock from the same website.
Finally, about the special locations, like I mentioned before, I had some vaults not saved locally, that I would only sync using Dropbox’s selective sync when I needed to use them.

I just wanna say that this is not a complaint and you are really filling a void in the security market out there. I really like you product and will continue using it. Please let me know if I you need more information.

I downloaded 1.4.17, and tried adding the cloud vaults (that were now saved locally) but now I get a warning saying that the vaults are in a newer format. So I’m lost now. It’s not a big deal, since I can roll back my Dropbox to the state it had before all this happened and use 1.5 to convert everything again.

1.4.x not being able to deal with newer vault formats is expected behaviour. There should be no need to revert and upgrade again. If migration was successful, there is nothing a second migration would do differently.

Now back to the original problems:

1. Cryptomator not starting until you deleted the settings.json.

Absolutely no idea what happened here, this is the first time I hear about this. I suspect there were other factors affecting the launch, but we will probably never know.

Since you resolved this yourself, I don’t think we should investigate any further, unless anyone else can reproduce it.

Just to make sure, we’re talking about the same dialog:

After choosing a file from the “macOS file chooser”: 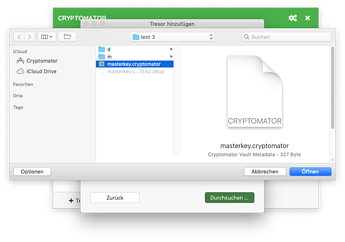 You’re back at this dialog: 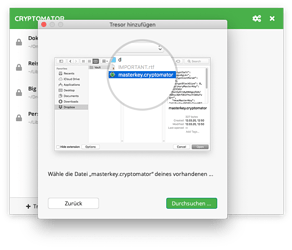 And while for your “local” vaults the dialog just closed and your vaults were added to your vault list, this dialog just does “nothing” for your fourth vault. Did I understand this correctly?

That is correct. I am back at the dialog of the last image.

And now you can reattempt opening it or cancel it? Or is the UI in any way frozen or otherwise impaired?

It’s not frozen. I can try to open it again and I keep getting the same result.

It seems to me that the masterkey file is somehow… weird. Could you please do the following:

Now try to add this vault. In my case, I was able to add the vault and even unlock it (of course it’s empty then). But even if that doesn’t work, could you please open the masterkey file with a text editor and check its contents? It should look something like this:

Or in your case, "version": 6 since it hasn’t been migrated yet.

That works. It’s telling me about upgrading the vault. Is it safe for me to post that file? I suppose I can change the password, so here it is:

PS: sorry for the late reply, I was prevented from posting so many replies in my first day.

I don’t have a good feeling of posting this in cleartext here, so I updated your post. Devs can see the original if my assumption that this information is not critical for the analysis is wrong.

However(!), I agree that it’s unnecessary to post the actual contents here because they don’t seem to add any value to finding the actual issue.

I still don’t understand why the masterkey file can be selected if it’s put in another location. Some vaults in Dropbox work, some don’t. Is there anything special about the vault’s name? Or are there special characters in the path leading up to the vault?

Nothing special about the location. In fact, one of the vaults that I successfully migrated had special characters in its path, not this one though. What do you mean by “some vaults in Dropbox work, some don’t”? is that a know issue or were you just restating the particularities of my problem?

I was just restating the particularities of your problem and trying to guess what might cause them.

@amrods Can you please attempt the following:

You can now deactivate debug logging again. Please attach the log contents (redact any paths, if you like).

I am not able to open the shared data ( no show) if data is on shared drive.
This worked since i use Cryptomator ( started in 2017 )
Two vaults open works if data is on local drive or onedrive

My issue was a windows smb3 encrypted remote share.