I am on Win-10/64 and CM 1.3.4. and I never noticed before (but it could still have been) that Cryptomator is eating 35-50% of all CPU cycles (on a high power machine), even though nothing is going on, just a backup of the filesystem with the vault on it (but there were very few changes in the vault).

This can’t be right. I need help. Thank you.

How’s your backup configured? Does the process check every file in the vault against a source destination for changes? Does it compare every single file bit against each other? I assume so and that does mean that even if there aren’t any changes in the source, CM has to decrypt the file so that the backup process can perform it’s comparison.

Thank you, but I doubt that that’s the case.

My unencrypted source files are on one drive (D:), the encrypted vault is on B: (which is on a physically separate hard disk), and I access the vault via a virtual drive V: (mounted by Cryptomator). I have a background process running that mirrors the source files from D: onto V: (copying only the changed ones over).

When the (cloud) backup runs, there is no way for the backup app to know that the source files on D: and the encrypted files on B: are related. It simply backs up the vault. It does not (!) access V: at all.

Mhm, ok. This sounds not normal.
Im actually on the same environment as you are, except the CM Version. I’m still on 1.3.3
If I have cryptomator running, mounted and opened 2 vaults, and not doing any operation on that vaults, the Cryptomator CPU usage is below 2%. This is also the case if I have cryptomator open and the sync app open and I am just syncing the encrypted files to my online storage. 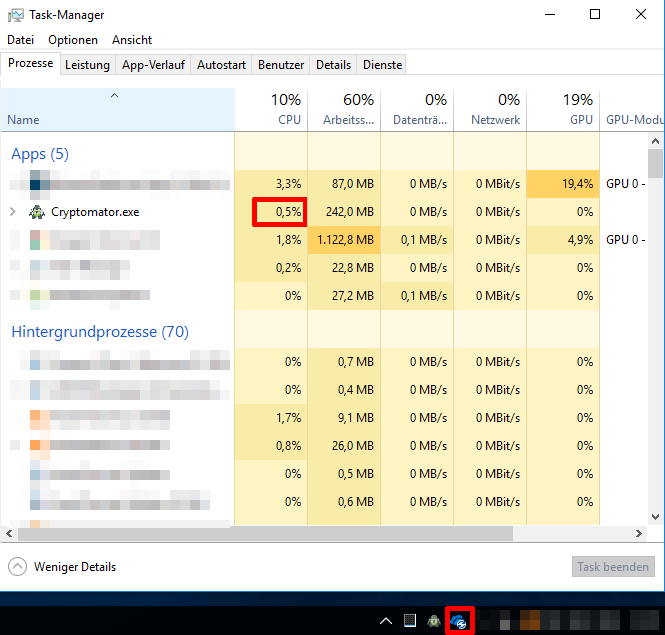 As soon as I start my backup, which actually compares the unecrypted local files with the files in my vault, then the Cryptomator CPU Usage is between 30% - 80% (depends on how much Resources are free for that process).
This is why I assumed that you do something similar.

Maybe anyone with V1.3.4 on windows 10 can have a look at the CPU Usage?
(But tbh, actually I’m not convinced that really nothing is touching your vault

Well, this is spooky. I stopped all backup processes, restarted the PC. After a while, Cryptomator kicks in an consumes 38% of CPU (8 threads).

I can confirm now that going back to version 1.3.3. did indeed help.

I guess I will have to test every new release if it eats up half of my (quite powerful) CPU.