i just bought Cryptomator 2 and set up a cloud directory but i cant get into it, it says „no access rights“.

In the directory settings the „unlock now“ button is greyed out.

I also created a second directory and it had the same issue. 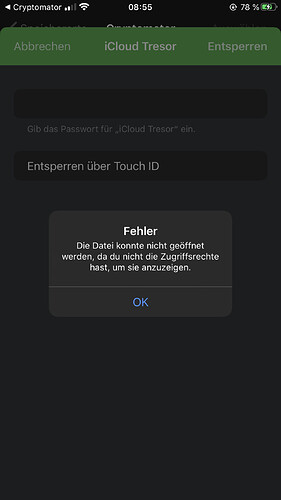 I re-installed the app and nothing changed, same issue…

Quick update: I’m in contact with @ICEMAN_ZIDANE and trying to find the cause of this issue. Currently, we believe that it has nothing to do with iCloud but something else. Unfortunately, the error message from the log file is not very helpful:

Usually, the error message should contain the file name/path in question but it doesn’t.

As we internally use the LocalFileSystemProvider for connecting to iCloud it could be that the saved URLBookmark for the root url of the vault directory somehow does not work properly. As we use the root url to derive all other sub URLs (including the permission given by the user to the root url) this could lead to the error reported by @ICEMAN_ZIDANE and would also explain why we not even have a file path in the error message.

But we should add more fine granular logging to the LocalFileSystemProvider and LocalFileSystemBookmarkManager in order to get a better understand what actually causes the issue.

I agree, I believe that loading from a bookmarked URL is the culprit as well after having a lengthy discussion with @ICEMAN_ZIDANE.

But I was highly confused since I’ve never heard of such a case before and I’m unable to explain why this functionality seems to be fundamentally broken on their device. Even though I don’t want to jump to conclusions, their device is jailbroken (even though, apparently, it can be turned “off” and it’s then the same). If that’s actually the cause, there is nothing that we can or should do about it. Nevertheless, more fine granular logging is a good idea.