I wish I could use Cryptomator - but there’s a problem. After I’ve istalled Cryptomator, I can build a new folder and create a password. But after doing the next step (entering the password) I’m receiving an error-message: “Unlock failed. See log file for details” (“Entsperren fehlgeschlagen. Siehe Log-Datei für Details”).

Adding Cryptomator to the ransomware exceptions has no effect. 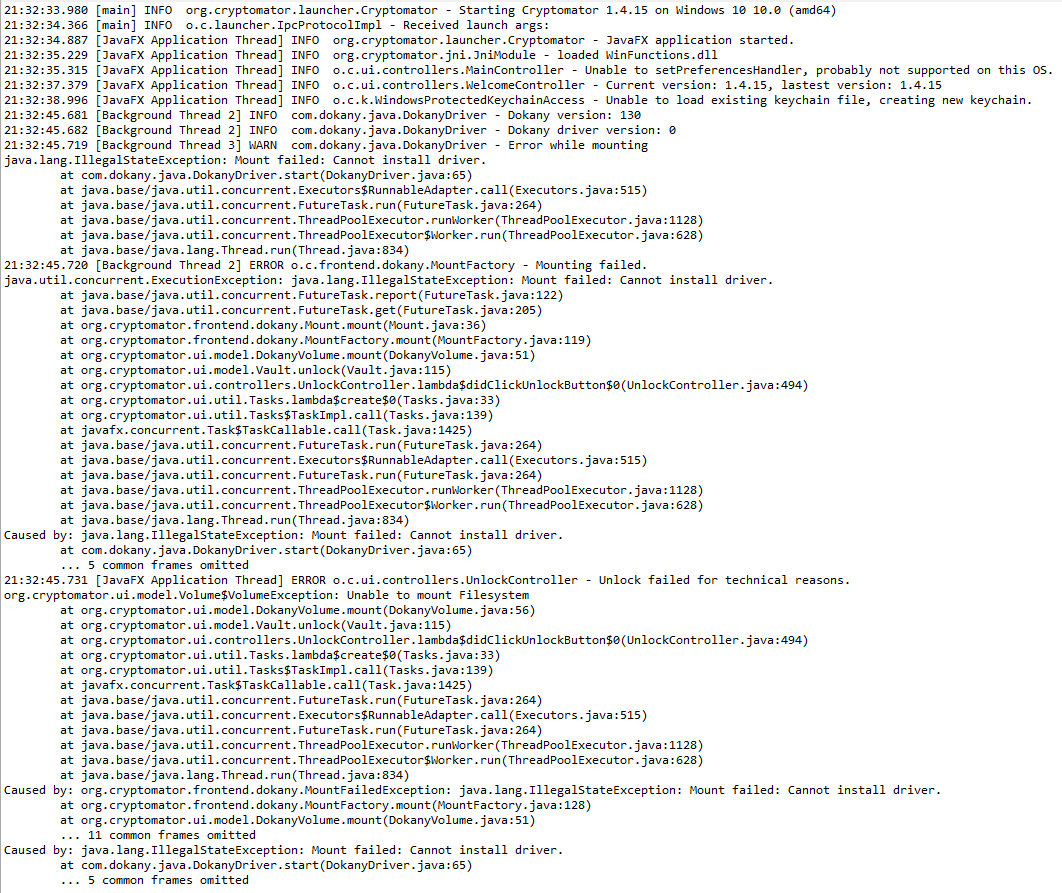 Can somebody help me?

Thanks infeo - but: no effect. Sorry. Logfile after Rebooting: 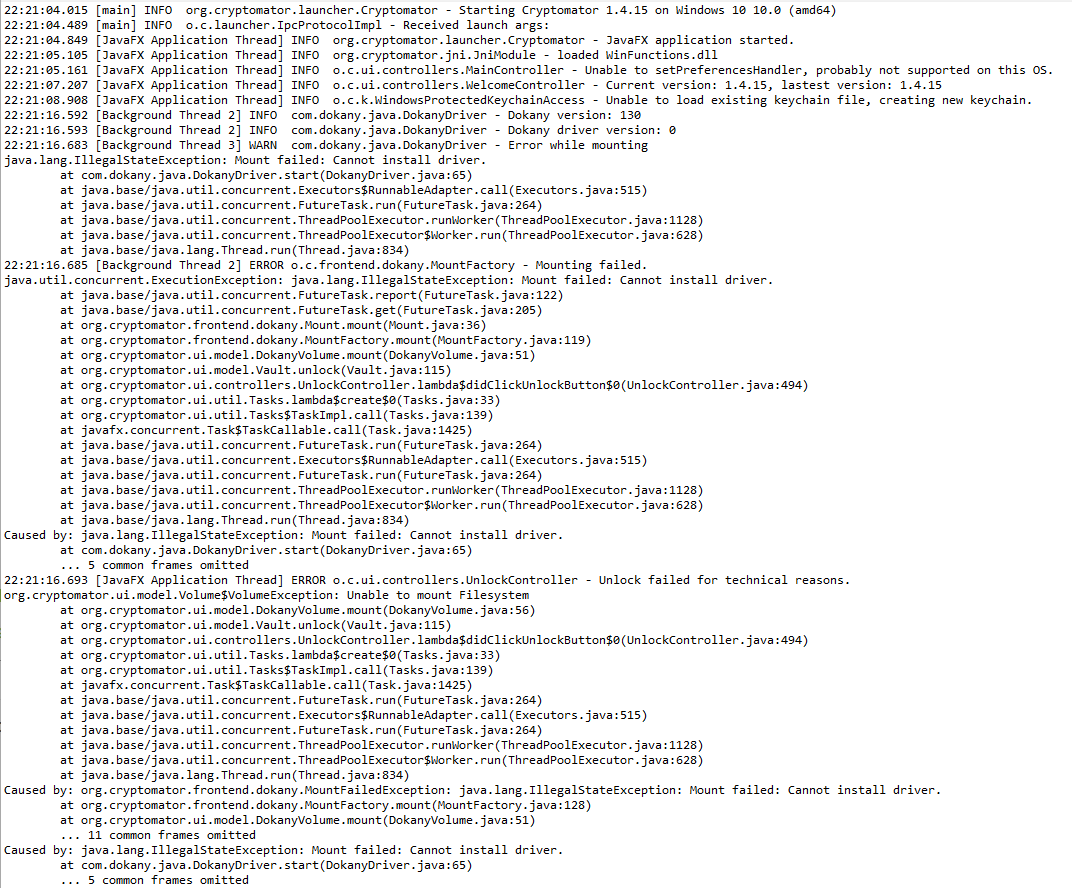 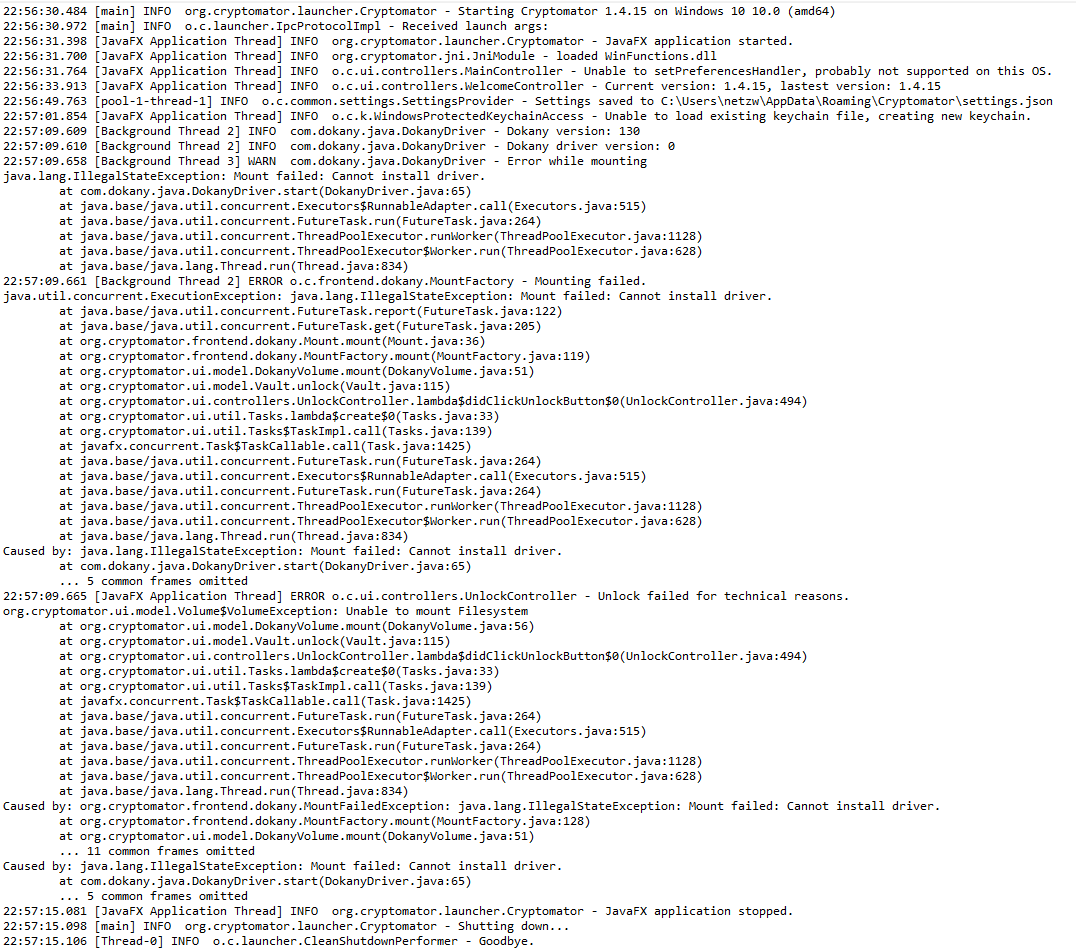 Cryptomator is independent of your installed java version, it ships its own JVM.

Apart from that, please do the following: (cumbersome, i know)

The reason is to get a clean Dokan installation. It seems like Cryptomator cannot detect the version of your Dokany driver: INFO com.dokany.java.DokanyDriver - Dokany driver version: 0

Thanks - but I need some futher help before. How can I uninstall Dokany?

update: for I haven’t found a regular installed version of “Dokan” or “Dokany” on my system - there were only a few files on C: that appear to belong to other programs like Rohos and Cryptomator - I installed your recommended version of Dokany (whatever Dokany is - now it is part of my system despite the fact, Win10 and its system safety didn’t want to allow the installation… ;o) ).

Result: Everything works fine - and Cryptomator does what he should do.

Thank you very much for your fast, competent and friendy help!

Dokany is a virutal filesystem provider, i.e. lets you implement your own filesystem in windows and also allows a native system integration such that you can access your files via the explorer. We use it as an adapter between the encrypted files and the decrypted view after you unlocked a vault.

If you do not want to have it, you can remove it again and switch in the general settings to WebDAV. There are some drawbacks (i.e. the maximum file size is 4GB) by choosing this volume provider.

Everything’s fine - I don’t have a problem with open source software recommended by a trustworthy software designer. One last question: has Dokany an integrated update-function/reminder?

Unfortunately not. But with Cryptomator 1.5.0 we will add a check routine during the update process, such that you always have a working version of Dokany in combination with Cryptomator.

Top! Thanks so much for your work - Cryptomator was exactly that, what I was searching for! Perfect!

More than one year later - and I can report, that I have recurring problems with updating Cryptomator. After starting the update-process, I get a error message, that Cryptomator has found an outdated Dokany version, which should be uninstalled before continuing the installation. But if I do so, the message doesn’t disappear. So I’ve tried some troubleshoots (e. g. "We detect an outdated Dokany version on your system" error even after deinstallation - #2 by infeo, but nothing worked. Now I’ve found out, that the right way is to uninstall Cryptomator first and then download and install the latest Dokany-version following your link above (https://github.com/dokan-dev/dokany/releases). After that I’ve installed the new Cryptomator-version and everything was fine.

Do you have any ideas, why I have that problems?

But if I do so, the message doesn’t disappear.

Did you performed the reboot suggested by the Dokany Installer?