since updating yesterday on new version of Cryptomator when I now (i) create a new folder or (ii) change filename for instance in an existing safe (fTresor) Mac always completely crashed and restarted.

Does anyone have same issues or solutions on this?
Thanks Daniel

When I was reading a few other posts, there seems to be a problem using WebDAV with Apple M1. Suggestion is to use FUSE. I guess no fix is available yet to go ahead with M1 & WebDAV, hence I’ll try to use FUSE so long.

This is a known bug, see

Description When a vault is mounted and I try to rename any folder inside of it, computer freezes and in few seconds...

The WebDAV Implementation of MacOS on M1 Macs seems to be broken. Like it is already mentioned, the current workaround is to use FUSE.

I am quite helpless around this topic, as I am new to MacOS …

I updated Big Sur, Cryptomator and FUSE on my Mac today.

But I am not sure what to do now.

The currrent workaround seems to be to use FUSE instead of WebDAV.
But my remote sync location is a WebDAV server!
I don’t have some FUSE server and also cannot install it, as this is a virtual Linux machine that does not allow to install any kernel modules like FUSE.

I still tried to just change from WebDAV to FUSE in the Cryptomator App, just to test if this still would be possible.

But trying to do, I got a pop-up that says “System Extension”, … could not be loaded. Please open … and allow … from developer Benjamin Fleischer …

But I did that already and got the answer, that FUSE got updated!

Opening thr System preferences in Security & Privacy, I see the message “System software from developer Benjamin Fleischer has been updated”.

So i am totally confused and unable to continue.

Just to explain, I am fairly capable on Windows and Linux, so not a noob - but I totally don’t get MacOS … I do not even understand the basics or am able to interprete it’s messages and so on …

What did i wrong?

To summarize my questions:

I managed to create a screenshot of that window: 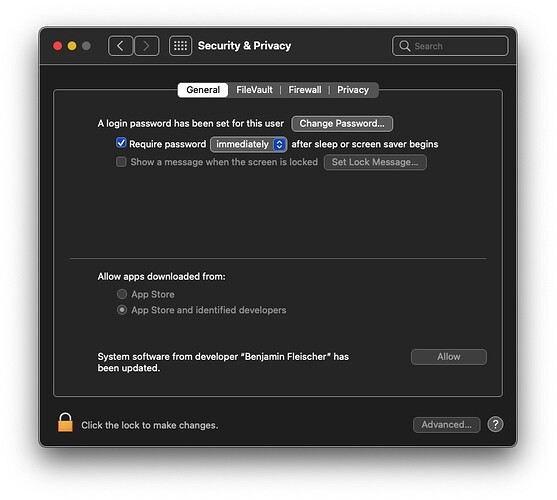 So, nothing named “fuse” is loaded, but maybe the name differs?

I also searched the directory:

Again, maybe i search for the wrong name. 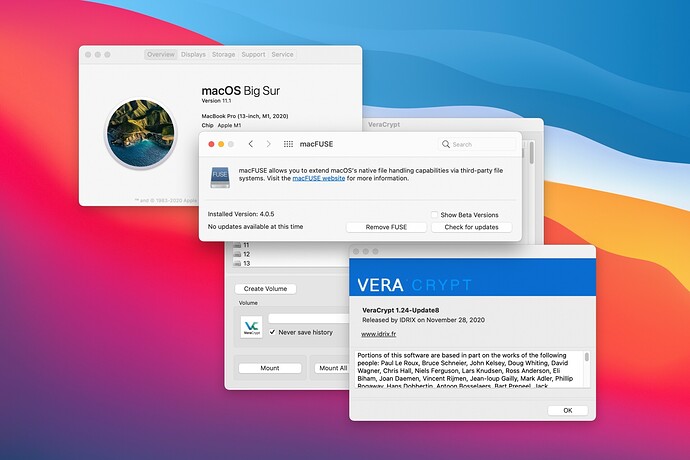 Here's how to install OS X FUSE on Macs powered by latest Apple Silicon M1 chips until it can work natively without workarounds.

Here, it is mentioned that is is required to check both boxes?!?

I really dont like to enable something that allows remote management.
Also, from other websites, I did not get the impression that it is required to enabled this option.

Could please someone who uses Cryptomator with FUSE / macFUSE on a M1 Mac and Big Sur comment on this?
What is really required?

Frustrating, to be honest …

I ran into the same issue with the M1 processor. Still unsure if it is a Cryptomator specific issue with Webdav or if it is a Webdav issue in general. If it’s the latter and anyone has found a fix, would love to hear about it since I use Webdav for other stuff.

Now regardless if Webdav is fixed for M1 or not, or even if you’re in an Intel machine, I really recommend everyone to use MacFuse instead of Webdav, is so much faster and reliable than Webdav which is why I’m guessing Veracrypt/Truecrypt have been using it for the longest time.