Bear w/ me good ppl, I have a lot of questions and am very confused and frustrated. I use the iOS app and the Windows desktop app. When I try to create a vault from Windows and click “add a new vault”, I try to create it within Dropbox, but it seems to automatically make it into a WebDAV drive 42427. That loads as vault(\@42427/fZ and a bunch of random letters. Now, that virtual drive comes up as an empty folder, but when I try to add anything to it, it says that it’s transferring “without properties” and everything has 0 bytes. The folder within Dropbox does contain the d, m, and cryptomator.masterkey files. Am I supposed to copy files into the vault within Dropbox along w/ those 4 folders/files or put them in m or d? Why is the virtual drive that pops up separately from Dropbox in Windows explorer empty; isn’t that supposed to be the actual drive?

When I look back to the vault on my iPhone, it’s also empty, whether I’ve added anything within Dropbox or to the virtual drive that pops up.

The Windows app looks like this (I’ll upload a photo.) If I ever get it right, how will I be able to tell that my files are encrypted? And what should it look like within Dropbox?

In OneDrive, I haven’t used my laptop at all, but from within Cryptomator, all that pops up is what I have manually uploaded from onedrive and the onedrive app has d, masterkey, pictures and music. If d is data, the files are unencrypted in separate folders. Then again in the Cryptomator app there wouldn’t be anything there at all unless I didn’t manually upload them. 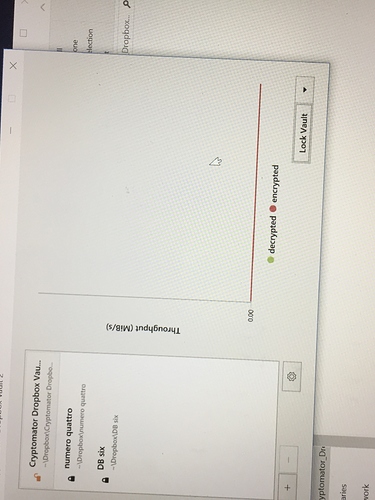 I also can never lock the app on Windows, it says I have to force locking even when I am out of Dropbox and don’t have other files in Dropbox open.

Just wanted to add something else that concerned me is it said that drive had 90gb full out of my internal hard drive. This is supposed to be in a basic Dropbox account of 2 gb! I had a cyberstalker/hacker before so i hope nothing I’m saying has anything to do w/ that.

Also, I tried to use Veracrypt as well to encrypt files on my desktop, and the same issue-can’t move files with their properties. So it’s not just Cryptomator, and I don’t know what else to do to encrypt my files! 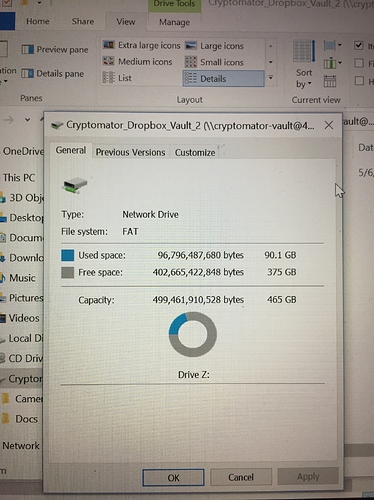 Hi. Did you watch this? It should answer the most of your questions

I did watch that video in fact, for some reason things go much more smoothly.

I see that I’m only supposed to add things to the virtual drive and they’re supposed to synchronize inside Dropbox encrypted. That doesn’t happen for me. On the left for me, the vault isn’t under “my computer”, it’s a separate drive, like how a usb stick would look. The number is always 42427 and the letter name is random. I add things to the folder, and I see now that apparently nothing is in them, as evidenced by the flat line. When things are somehow moved correctly, they have “zero properties” and therefore 0 bytes. I have the same problem trying to move things to a Veracrypt container-I get the same “are you sure you want to move these files without their properties?” message there, so whatever that is, it’s not a Cryptomator specific problem. I read it’s a Windows problem and don’t know how to fix it. Also in that video, he can lock the vault without getting the error message about “forced locking”, despite everything being closed (it says it can be caused by someone still using the files in question or “some other problem,” so it’s “some other problem.”)

it’s a separate drive, like how a usb stick would look. The number is always 42427 and the letter name is random.

Yes, that is the weddav Drive where you have to place your files you want to encrypt.

Don’t know why your system is asking you for the properties and don’t copy files in there. Maybe someone else has a clue.