Suppose I forgot where my encrypted vault is saved (the one containing the masterkey file and the “d” folder). Is there an easy way to determine where Cryptomator is saving the encrypted vault to on Windows?

The reason I ask is that I just installed an SSD in my laptop alongside the HDD that came with it. As part of the migration I cloned my HDD to the SSD and configured my laptop to boot from my SSD. My SSD is now the C: drive while the HDD that used to be my only hard drive is now the E: drive.

Currently both hard drives have the exact same files on them which means that I have two copies of my encrypted vaults. I did a test by adding a file to the decrypted vault and seeing which version was updated and confirmed that Cryptomator is saving my encrypted vault to the new SSD located at C:

But is there an easier way to do this through the GUI? Something like the “reveal vault” button, but which takes you to the encrypted files rather than the decrypted view?

open the desctop app and have a look at the path that is shown in the vault list on the left side of the app, below every vault. 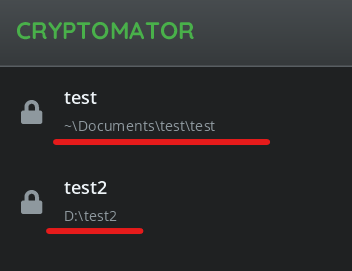 Thank you! I wasn’t familiar with the “~” and that it was an abbreviation for my user home directory so when I saw this I didn’t realise that that was actually the path. Seeing your example with D: it makes sense now. 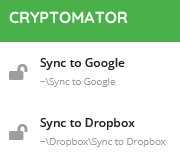