Dropbox shows masterkey.cryptomator.bkup file as the only one updated today but

So I use it with Dropbox, and I have noticed this behaviour a couple of times: if I make small changes to one or more files in the vault, when I sync the vault sometimes Dropbox tells me that only masterkey.cryptomator.bkup was sync’ed.

For example, today I made a small change to one of the files in the vault. The pic attached shows 2 files under today, but the obfuscated file is not in the vault. The only other file from today is masterkey.cryptomator.bkup. 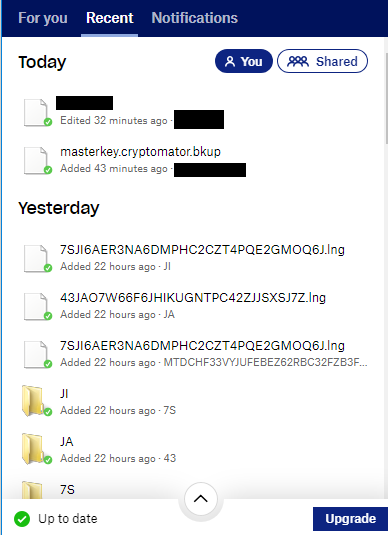 Is this expected behaviour, i.e. if a minor file change is done, would that roll into masterkey.cryptomator.bkup perhaps, or is something else going on?

I hope my question is clear.

Hi. Even a minor change on a file changes also the encrypted one.
So if you are changing a file, you should see a change in the encrypted ones as well (you can search local for files with lates change date).
(the masterkey backup changes on every successful vault login.)
Why the dropbox app does not detect these changes and sync them? I have no idea.

Hi Michael, thank you, that’s what I suspected. I will try a direct file comparison to ensure stuff is actually being sync’ed in Dropbox.

I will report back. Thanks

I tested the Dropbox sync: I created a small text file which then I copied into the vault, while Dropbox was open.

The Dropbox “sync” icon in the notification area started spinning, so that indicates that some files are being indexed/uploaded.

Once again, the recent activity does not show these files being uploaded, however after the sync operation I downloaded the vault from Dropbox onto a different machine and I could see that the small text file I created was indeed in the vault.

So the conclusion is that not all recent sync activity is necessarily being reported in that window but that does not matter that much, as long as all files are transferred.

Hi all,
I wanted to post an update: I tested also Microsoft OneDrive and this solution does not have the problem that Dropbox has (described above), i.e. any small change is flagged correctly by OneDrive.